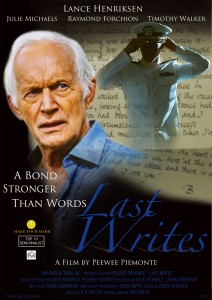 The film has been submitted to the Academy in the short film division and we are excited about how this film of tolerance, love and family will be received.

When a woman, tired of her unsupported family, decided to find out about her banished Uncle after he dies, she falls upon a plethora of “love letters” written to him during WWII. She sets out to find the author of the letter who only goes by “B”. Who she finds as her uncles love, is quite different that she had imagined, but the love she experiences is the kind she could only hope for in her own life. See the trailer below:

One thought on “Last Writes”

"From Concept to Conclusion…"